We set out to find, recognise and reward people with learning disabilities who had amazing achievements.

Each of our winners has achieved exceptional success in their field – from local politics and employment, to publishing, art and sport, and all show leadership and independence not usually expected of people with learning disabilities.

To celebrate their achievements each winner had a short documentary film made about them and an engraved plaque placed on a public building in Worcestershire.

The RespectAbility plaques each have a QR code that, when scanned by a QR reader on your smart phone, will take you straight to the film about that person.

The Seven Amazing People who have had film made about their lives and achievements, and a plaque dedicated to them in a public place somewhere in Worcestershire, are: 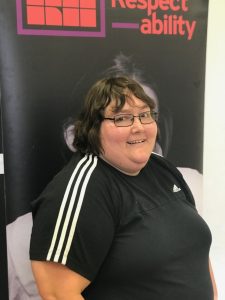 Rachel has had to grow up without a family to support her and has come such a long way in her life already. She lives in her own home and works for the Worcestershire self-advocacy group, Speakeasy NOW.

She has worked with their Health Checkers Project since it began in 2010 and has now found her niche. Her special interest is in supporting people to come out of Locked Hospitals (known as Assessment and Treatment Units). She says “I now know what I want to do”. She wants to help others with learning disabilities get excellent services they deserve.

Improving the Future for Others

Rachel is a paid “Expert Member by Experience” of NHS England’s Transforming Care Partnership. She is a valued member of the meetings attended by senior members of Health and Social Care. The Transforming Care Partnerships have been working at a regional level to change services in a way that will make a real difference to the lives of children, young people and adults with a learning disability and/or autism, who display behaviour that challenges, including those with a mental health conditions. Rachel has been asked to promote the Transforming Care Partnership, alongside the WCC Commissioner of Complex Needs, at different forums around the country, to let others know what progress is being made in Worcestershire.

A RespectAbility plaque for Rachel Barrett, linking to a film about her life and her work, was unveiled at Malvern Cube on 24th May by The High Sheriff of Worcestershire, Mr Edward Holloway.

It will be permanently displayed there. 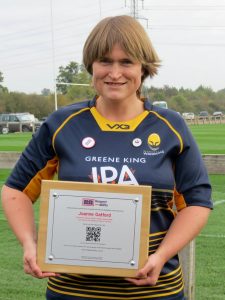 As a child, Joanne was incredibly shy, hid behind her Mum and found interaction with others very difficult. She took a big step forward when she decided to move away from home to Derwen College, and it turned out to be a huge leap in building her confidence.  At Wildgoose, Joanne joined the workstream project. This was a challenge for Joanne, but one which she rose to and it has continued to build her confidence. Joanne now gently gets alongside other less able students to help them out and show them what to do. She naturally takes on a supervisory role and helps put new students at their ease. Joanne has a wicked sense of humour which shines through all she does and is her tutor’s able assistant who relies heavily on her help.

As an Ambassador for People with Learning Disabilities

As a natural part of Joanne’s character, she has begun to taken on an ambassadorial role pushing boundaries and helping others with learning disabilities and special needs. At 18, Joanne was selected for an International Guides event. Without Joanne’s tenacity she could have been so easily overlooked.  Joanne also starred in a promotional video for Hazel Court Housing, where she now lives.

Joanne is currently involved with promoting mixed ability rugby for Worcestershire Warriors, which involves going to talk with students at Worcester University.  Joanne loves playing rugby.  Her coach reports that her ball handling and position changing are brilliant.

Joanne’s commemorative wall plaque was unveiled at Worcester Rugby Club on 22nd October 2018. It will be permanently displayed in the entrance lobby. 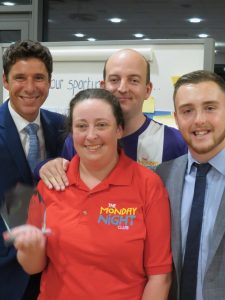 Being Chair of Worcestershire’s People Parliament

The People’s Parliament examine and question the services provided by public and private organisations for people with learning disabilities in Worcestershire. The members of the parliament hold decision-makers to account and insist that changes are made to improve services. They have had great success over the past few years, investigating support services, housing, employment, planning for the future, public transport, health services and health equality, police, crime, justice and probation. The most recent success has been the provision of a Travel Wallet for people with disabilities in Worcestershire.

From small beginnings 6 years ago, The Monday Night Club is now one of the liveliest places for people with learning disabilities and autism to gather in Worcester. Laura has overseen, as the Chair of the Trustees, the club’s progression to becoming a registered charity and the hub of many social activities, from day trips to theatre shows, parties and sporting activities. In 2018 the Club received the Queen’s Award for Voluntary Services, the MBE for groups.

A personal ambition to achieve a recognised coaching qualification has lead to Laura starting a football team. She took the qualification to become a FA Level 1 football coach and the team she started, the Monday Night Club Football Team, has joined the Three Counties Ability Counts League and is hoping for a successful first year of competition. 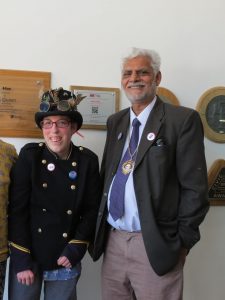 Jess has co-authored three children’s books to promote awareness of people who have learning and physical disabilities. The hero of her books is Jess the Goth Fairy and the message – It’s OK to be different! She hopes by sharing her feelings in this book it will help everyone to know what it is like to be disabled. Jess travels the country to book-signings, readings and workshop events.

A reviewer said “A deceptively simple but powerful story with beautiful illustrations which I feel should by read by all parents or guardians with their children. It highlights the importance of how we’re all different and yet our core human desire is to be treated equally, and so we should be.”

The funds to enable Jess’s first book to be professionally illustrated and published were raised by a crowd-funding campaign.

As an Ambassador for People with Learning Disabilities

Jess is a National Special Olympic gold and silver medallist, a member of the People’s Parliament of Worcestershire, helps teach sign language at a day centre and works in a garden nursery.

Jess’s commemorative wall plaque was unveiled at The Hive Library, Worcester on 7th July 2018 by the Deputy Mayor of Worcester, Councillor Allah Ditta. It will be permanently displayed in the foyer. 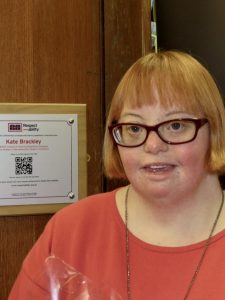 Living Independently and Being Fully Employed

Kate lives in her own flat and works in the British Institute of Learning Disabilities (BILD) in Birmingham. She travels to work every day on the train. BILD has been championing the rights of people with learning disabilities since 1971. BILD uses its skills, knowledge and experience to turn policy into practice, solve problems and improve support. Their aim is to improve the quality of the lives of people with disabilities. Kate is an important part of the organisation, bringing her expertise by lived experience. Because of her high profile, she was invited to appear on the Victoria Derbyshire programme on BBC1, to talk about the experiences of people with learning disabilities in finding employment. She represents BILD in the Worcestershire People’s Parliament.

Being a TV Personality

Kate has achieved fame across the country as a star of The Un-Dateables TV programme on Channel 4. She appeared in the first series and subsequently her story was followed in other episodes. She took part in Red Carpet events, press conferences and talk shows to promote the series. (She is now in a happy relationship.)

Kate takes part in the annual pantomime and other musicals with the Norbury Players at the Norbury Theatre in Droitwich.

Kate’s commemorative wall plaque was unveiled at The Droitwich Spa Heritage Centre on 27th October 2018 by the The Mayor of Droitwich Spa, Councillor Chris Bowden. It will be permanently displayed there.

Representing Her Country in Sport

Jenny is extremely fit and active and is an inspiration for all people with learning disabilities. She is the perfect example of just how important keeping physically fit is to your health and well-being. Jenny goes to athletics training on Thursdays, gymnastics on Saturdays and Sundays, and swimming on Saturdays. Her sporting hero is Ellie Simmonds.

What does Special Olympics GB mean to Jenny?

“It gives me lots of activities to do; I spend time with lots of friends, and we spend a lot of weekends travelling to events. I have made lots of friends from Special Olympics. I am very busy and go to lots of competitions and I do lots of training. At competitions I love cheering for my friends”.

Jenny works in a care home with elderly people, she helps in a café and she has won talent shows with her dancing partner. She enjoys music and art, and spending time with her family.

Jenny’s commemorative wall plaque was unveiled at Perdiswell Leisure Centre in Worcester by Rebecca Redfern, Paralympic swimmer.
on 15th December 2018.
It will be permanently displayed in the reception area. 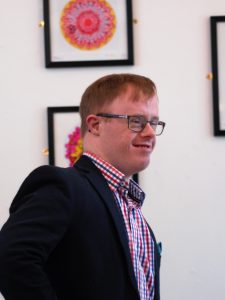 This amazing person has been selected:

As a Talented Artist

Jamie is very talented at art. The direction of his work has taken him towards detailed colouring. He has made many complex images by this method. These images are transformed into greetings cards, and sold to to raise money for local charities.

As a Charity Fundraiser

Jamie has raised significant funds from the sale of his artworks and cards. He has supported Worcester Snoezelen, and, just this year, he raised £500 for both Children in Need and Acorns Children’s Hospital.

Jamie’s commemorative wall plaque was unveiled at Worcester Arts Workshop in Worcester by The Mayor of Worcester, Jabbar Riaz,
on 7th May 2019, at the Private View of his first art exhibition.
It will be permanently displayed in the WAW Café Bar.

Awards 4 All, The Big Lottery, who funded the project
C&T who made the short films.
Brunel Engraving who produced the engraved plaques.
Helen Gill at The Monday Night Club for co-ordinating this project.

And to all the public buildings in Worcestershire that host our RespectAbility Plaques!